From Gynopedia
Jump to navigation Jump to search
Greece / Mykonos

As an EU member state, Greece follows general Southern European standards related to sexual and reproductive health care. You can purchase birth control pills without a prescription at pharmacies. Furthermore, you can also purchase emergency contraceptive pills (the morning after pill) without a prescription at pharmacies, though most pharmacies are closed during the evenings and weekends. There are many providers of STI tests and, at some clinics, you can find free HIV tests. Abortion is fully legal and available upon request in the first trimester of pregnancy. However, parental written consent is required for minors who wish to obtain an abortion. Following the first trimester, abortion is legal in certain circumstances, which we detail in the "Abortion" section. From a historical perspective, Greece has faced periods with rather stringent laws related to reproductive health, and family planning was actually illegal until 1980. However, the country has liberalized over the years, both politically and socially, and one can find many health care resources in Greece today.

In Greece, birth control is available at pharmacies, clinics or health centers without a prescription.[1] [2] However, modern contraceptive methods, like birth control pills, IUDs or injectables, are less commonly used in Greece than in many other Southern European countries. It's been estimated that 68.7% of Greek women (who are married/in unions and of reproductive age) use any form of birth control, including traditional methods, and about 10% of women had unmet family planning needs. By far, the most common contraceptive methods are condoms (33.9%) and withdrawal, also known as the "pull-out method" (21.7%). Meanwhile, there are low usage rate for most other modern contraceptive methods, such as birth control pills (4.8%), IUDs (3.6%), female sterilization (3.6%). There was an estimated 1.1% of women who used the rhythm method. According to 2015 data, there were practically no women who used contraceptive injectables (0.0%) or contraceptive implants (0.0%).[3] 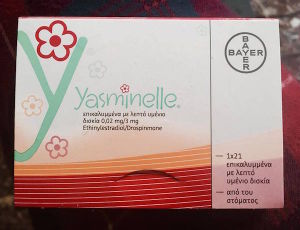 Yasminelle purchased in Greece for 10 euro

In Greece, there are no specific laws aimed at people with HIV. This means that, if you are a non-Greek citizen and you plan to visit the country, you will not be asked for medical certificates or proof of HIV-negative status.[11] There are also anonymous testing sites, community-based testing and counseling (before and after testing) in Greece.[12]

In the past, there were reported roundups of sex workers who were suspected to be HIV-positive, and such sex workers were often forced to be tested by the Centre for Disease Control and Prevention.[13] If they were found to be HIV-positive, they were accused of causing bodily harm to other people, and they faced potential criminal charges and/or deportations. However, in 2015, Greek Prime Minister Alexis Tsipras announced the repeal of Public Health Decree 39A, which was the law used to justify these roundups.[14]

In Greece, it's estimated that about 20,000 people are living with HIV, according to 2015 data from the Hellenic Centre for Disease Control and Prevention. There are 14,500 registered people living with HIV and 6,500 HIV patients on ARV treatment. The majority of HIV transmissions are through sexual intercourse, including sex between men (44.1%) and heterosexual sex (17.4%), and intravenous drug use (13.2%).

In some regions, you can find HIV tests for free, but not in all regions.[15]

What To Get & Where To Get It[edit | edit source]

For local recommendations of gynecologists, visit the city pages, like the Athens page.

In Greece, maternity leave is given to insured women for 56 days before the birth and 63 days after the birth. After pregnancy, employed mothers are allowed six months of maternity protection leave and reduced working hours leave.[17]

For local recommendations of ob/gyns, visit the city pages, like the Athens page.

Historically, Greece has faced some challenges related to abortion access and choice. In fact, family planning was illegal until 1980. This can be partially attributed to conservative cultural and religious beliefs. The Greek Orthodox Church considers abortion to be a crime and, under the Greek Penal Code of 1950, women who sought out abortions could face harsh punishment. In 1978, the Greek government passed Law No. 821, which permitted abortion in cases when the fetus faced a serious risk of malformation. However, it was not until 1986, with the passing of Law No. 1609, that abortion became available upon request. According to a UN report, "It is widely believed that the liberalization of the abortion law in Greece has made little difference in the abortion rate because, prior to its liberalization, a person performing an abortion or a woman undergoing an illegal abortion was rarely prosecuted. Indeed, it is believed that one of the main motives for the liberalization of abortion law was to preserve the integrity of the legal system, which was threatened by the increasing incidence of illegally performed abortions that were not prosecuted."[21]