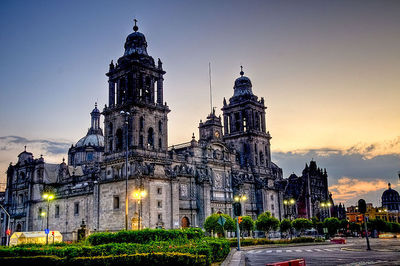 Generally speaking, Mexico City has the most progressive health care policies and resources in the country of Mexico. However, there are still social and economic barriers for many people, depending on their lives and circumstances. You can access many forms of contraception (birth control), including condoms, pills, injectables, shots and IUDs. Emergency contraception (the morning after pill) is available at pharmacies without a prescription, and there are no age restrictions. Regarding abortion, Mexico City was the first place in Mexico to legalize abortion. Additionally, Mexico City was the only place to permit abortion in the country for many years, until the state of Oaxaca decriminalized abortion in 2019.[1]

You can obtain many forms of birth control, such as pills and condoms, over the counter (no prescription needed) in Mexico. For other forms of contraception, such as IUDs, you will need to visit a health care provider.

In 2015, it was estimated that about 73% of women in Mexico (who were married/in unions and between ages 15 to 49) used any form of birth control, including traditional methods, and about 11% of women had unmet family planning needs. The most common forms of contraception were female sterilization (about 36% of women) and IUDs (about 12% of women). This was followed by male condoms (about 7%) and contraceptive injectables (about 5%). Some women used traditional methods, such as the rhythm method (about 2%) and withdrawal (about 2%) as their primary form of contraception. There were relatively low rates of usage for male sterilization (about 2%) and practically no users of contraceptive implants (0.0%).[2]

Emergency contraception is available without a prescription, and there is no age restriction.

There are no restrictions based on HIV status if you want to enter Mexico or live in Mexico.[4] However, before couples get married in Mexico, they are required to be tested for STDs. If an STD is found, the partner must sign a waiver saying that they are aware that their partner has an STD.

Regarding HPV, according to the HPV Information Centre, "Cervical cancer ranks as the 2nd most frequent cancer among women in Mexico and the 1st most frequent cancer among women between 15 and 44 years of age. About 5.1% of women in the general population are estimated to harbour cervical HPV-16/18 infection at a given time, and 65.1% of invasive cervical cancers are attributed to HPVs 16 or 18."[5]

While pads are easier to find, you should be able to find tampons at most major supermarkets (with and without applicators). It's supposed to be more difficult to "Super Plus" tampons, but they may be available at Mega supermarkets. As for menstrual cups, you can purchase Angelcup, which is a Mexican menstrual cup company ("100% mexicana"). They sell the Crystal menstrual cup for 625 pesos and the Colors menstrual cup for 700 pesos (as of February 2017). You can also purchase Lunette from Alternatives Ecologicas. There are no local sellers of DivaCup, Mooncup or LadyCup in Mexico, so those brands should be purchased online.

Abortion law in Mexico City is the most liberal in all of Mexico. In Mexico City, you can get an abortion within the first 12 weeks of pregnancy (i.e. first trimester). However, in many states of Mexico, abortion is only permitted for rape victims. Some states also allow abortion in cases of genetic malformation of the baby, but exact laws vary.

You can get Misoprostol (the abortion pill), which is registered as Cytotec, Artrotec and Cyrux. They tend to be expensive but can be found in most pharmacies in Mexico City and you don´t need a prescription! If they don´t want to sell it to you, go to another pharmacy. It is prescription free in the whole country and costs normally between 400 and 500 pesos a box (28 pills and you´ll need 12 if you use only misoprostol, or 4 if you use it in combination with Mifepristona which is MUCH more effective. But that pill is not available for people in general, only for health providers so if you go to any clinic where abortion is available, they will provide it for you).

If you are interested in public abortion clinics, there are 13 clinics run by the Mexican Ministry of Health in the Mexico City area. Check out the Ministry's website for details: http://ile.salud.df.gob.mx/directorio-clinicas-interrupcion-legal-del-embarazo/. Note that the website is Spanish but can be translated into English in the Google Chrome browser. Below, here is the public clinic list as of July 2016:

If you live outside Mexico City, Fondo Maria (http://fondomaria.org/) helps women travel to Mexico City in order to get a safe abortion. They provide funds, shelter, clinic escort, and they will help you set up an appointment.